Let us know if you are attending!

The musicians will unite in the intimate Sands Showroom for “The After Party,” an interactive show which will see the crooners perform each other’s hits with a live band, rock their loved choreography, explore other genres, bring in surprise guests and share untold stories from their time on the road.

“We wanted to do something with the idea of the Rat Pack meets the Pop age now — different artists coming together and doing a show that’s fun, but also takes you through a bit of history,” Fatone, 44, tells Variety. “But it organically also turned into more of a celebration of our bands and a homage to pop culture.”

“You’re going to see these guys and these groups in a light you’ve never seen them in before,” Fatone adds.

The news comes just weeks after McLean, Carter, Fatone and his bandmate Lance Bass hit the stage at The Grove in Los Angeles to debut their collaborative group “Back-Sync.” Earlier in June, McLean also teamed up with *NSYNC’s Chris Kirkpatrick and 98 Degrees’ Jeff Timmons for a Las Vegas fundraiser benefiting the Victoria’s Voice Foundation.

Fatone says “The After Party” was in the works well before Back-Sync, partly inspired by his “Joey Fatone and Friends” concerts at the 2019 Epcot International Food and Wine Festival. The shows saw him perform alongside musicians including Kirkpatrick, Ryan Cabrera and Boyz II Men’s Nathan Morris.

Both Fatone and Carter were further inspired after competing on “The Masked Singer.” “It was so fun doing songs and covers, we thought, ‘Why not integrate that into something we can do with a show?’” Fatone says, noting that all four musicians have also competed on “Dancing With the Stars.” “We’re getting our setlist together right now and coming up with a lot of crazy, interesting ideas.”

“We’ve had so much fun putting this show together,” adds McLean. “I can’t wait to share it with the fans. I promise an incredible night of wild surprises.”

Justin will be featured on an episode of “My Life on MTV” on MTV airing July 3rd. His episode will be shared with Jennifer Lopez.

*NSYNC will be featured on the same show, airing July 17th. They will share an episode with Britney.

“My Life on MTV” will feature clips of performances and appearances of artists on MTV. Check local listings for times.

We will be compiling all kinds of media regarding the “BackSYNC” project from Bingo Under the Stars on 6/18. If you have any photos and videos you’d like to share with us, please send them along to [email protected]!

Have you checked out Lance, Joey and Chris in “The Ad Where Nothing Happens” with Flo from Progressive?

What Does the Future of *NSYNC Hold?

Following *NSYNC (minus Justin Timberlake) performing with Ariana Grande at Coachella last spring, a lot of people wondered what could be next. A tour? A new album? And would it be with or without JT? Well, Joey says there were definitely some question marks after their weekend in the desert. “We started getting phone calls, of course,” he says. “‘Well, are you guys back together? What are you doing? Oh my gosh! There’s an offer here.’ This, that. There were offers thrown on the table, but the whole thing was, I don’t think we were ready for it yet. I don’t think even at the moment, like to really mentally wrap our head around to see what we want to do, and I think that’s the conservation that we really have to have that we haven’t had yet. It’s really going: ‘Do we wanna do it, or do we not? And if we do want to do it, what is it?’ And that’s something that will definitely take some time.”

That said, he’s not shutting down the possiblity. “It’s not a no, but it’s not a yes, because the thing is, we may come up with an idea that may not work for all of us. … If I did do something like this, I think it’s just something that definitely we will wanna do maybe more music, but also have fun, do you know what I mean? … There’s not a lot of pressure anymore. Usually back in the day, it was, ‘You need to be No. 1. You need to do this. This should be that. This should be this.’ For us, if we ever came back out, it’s like it’d be nice to do all this stuff and be No. 1, but we’ve already done it. We’re in our 40s! We got kids now! The backstage is going to be completely different, that’s for damn sure! There’ll be a lot more kids running around, no groupies,” he laughs.

Thanks to Claudia for sharing on Facebook, check out Joey and Chris’ panel at the FanX convention in Salt Lake City, UT.

Hello out there! Now that I have returned from my Disney vacation, I bring some NSYNC news! Joey will be performing at EPCOT’s Eat to the Beat series as part of “Joey Fatone and Friends” which includes Chris Kirkpatrick and Ryan Cabrera.

They will be performing in the American Theatre November 12th-14th. Dining packages are available through Disney with preferred seating.

November 12-14th! I’ll be there with some friends @iamckirkpatrick and @ryancabrera annnnd there might be some surprises! #epcotfoodandwinefestival #waltdisneyworld #wdw #worldshowcase 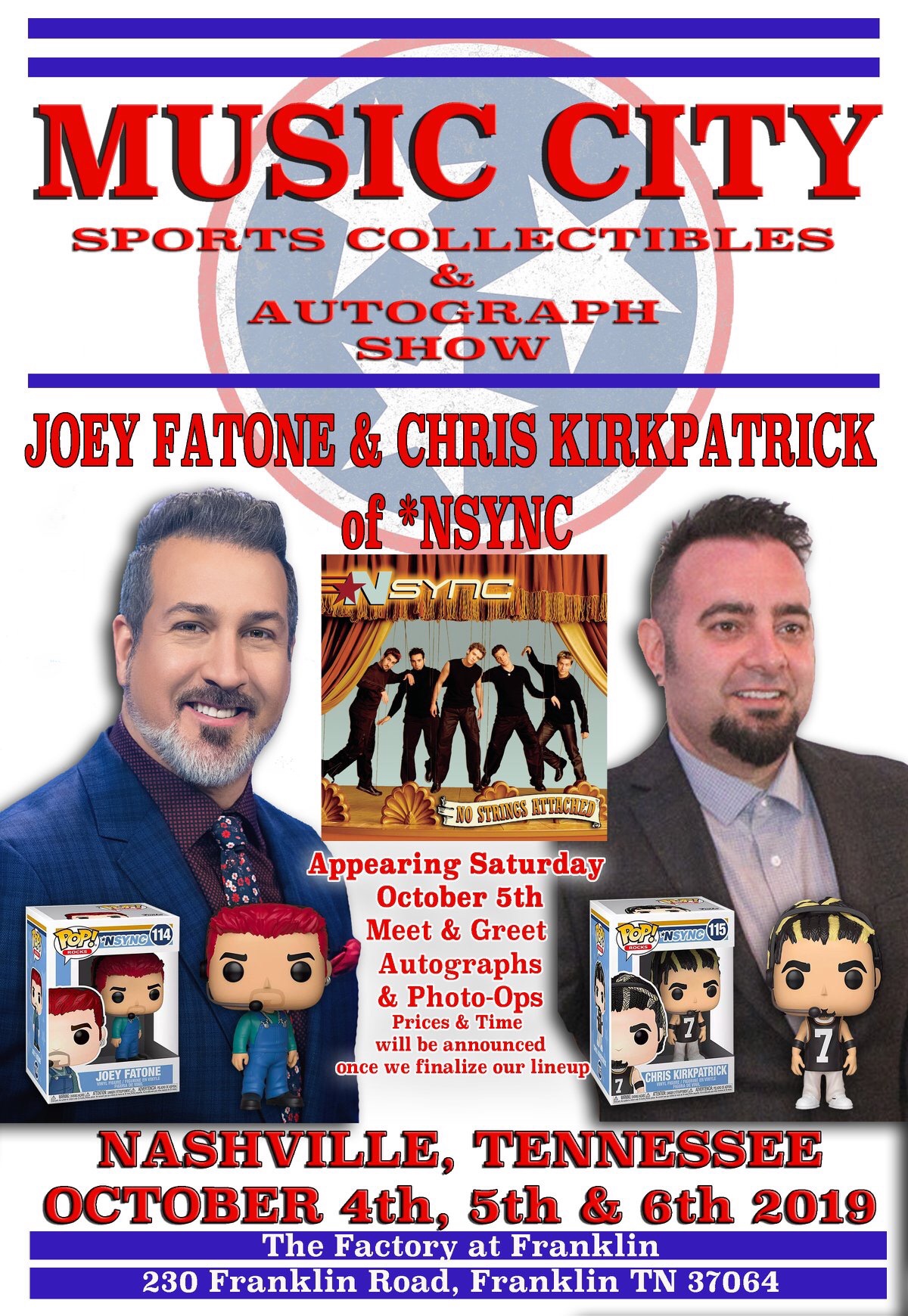 We have had a Huge response and we are going to start pre-selling tickets for the Joey Fatone and Chris Kirkpatrick appearance. We will have a “NSYNC” package which will include a combo Photo-Op with both Joey and Chris as well as one autograph ticket for each. The Photo-Op will be taken by our photographer and printed out at the show as an 8×10 photo. The “NSYNC” packages will be sold in number order and the lower the number, the closer to the front of the line you will be. Those who bought packages will have priority in line, next will be those who purchased individual tickets online, followed by day of purchases if available. The $125 Package price WILL SELL OUT so dont miss out on this savings! We recommend pre-ordering tickets at this DISCOUNTED Price while they last, as we expect this “NSYNC” event to sell out.

Hi *NSYNC fan! We use cookies on this website for your best viewing experience. By continuing to use the service, you agree to our use of cookies -- and we don't mean Cookie Man and his sidekick, Sprinkles.